Click on the green icons for more information about each location 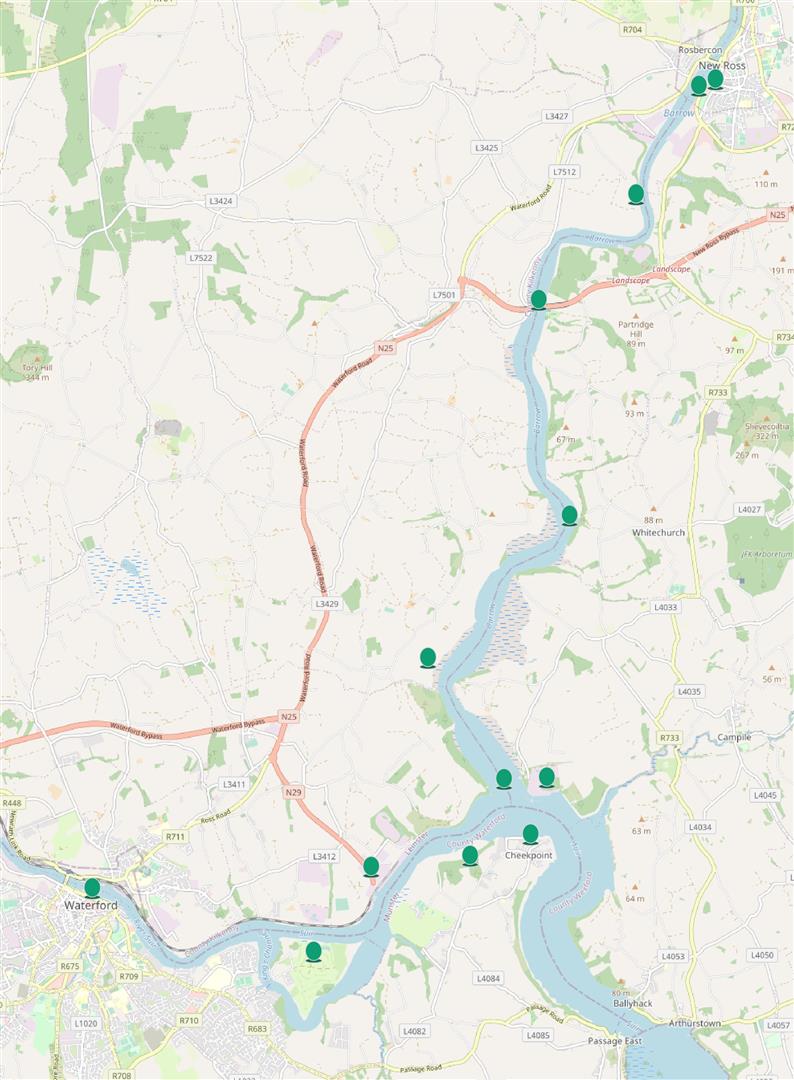 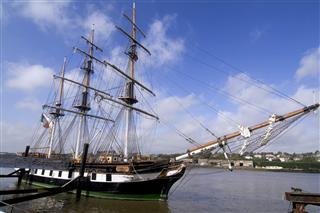 Just a two-minute walk from where we dock in New Ross Three Sisters Marina, you will find the Dunbrody Famine Ship Experience. Open daily, a visit to the ship is a must.

The Dunbrody is an authentic reproduction of an 1840’s sailing ship. The experience includes a living museum of Irish history that will tell you everything you need to know about life for emigrants during the Irish famine. 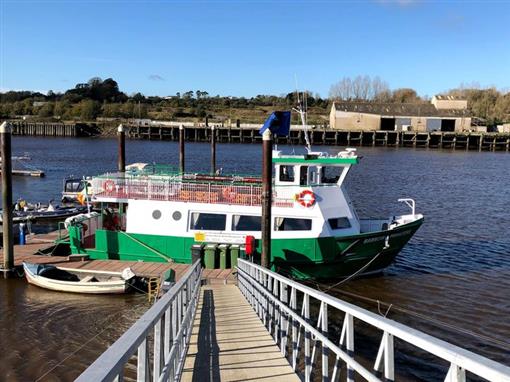 Our embarkation point, the New Ross Three Sisters Marina, is only 3 minutes walk (240m) from Dunbrody Famine Ship Experience and the centre of  New Ross, a town steeped in history. As far back as the 5th century, it was a renowned location of Christian learning. When the Normans arrived in the 13th century,  the town and port developed into a major international trading centre under “the greatest knight”, William Marshall .

The town was the site of many battles through Cromwellian times and the 1798 Rebellion. The Dunbrody Famine Ship, first launched in 1845, now tells  the tale of widespread starvation that forced more than a million people to flee the country.  The descendants of one of those emigrants, the Kennedy’s became one of the most influential political families of the 20th century in America. The Kennedy homestead just outside the town is a unique cultural museum is dedicated to the Kennedy family story. There is much to explore and enjoy in New Ross. Enjoy your visit! 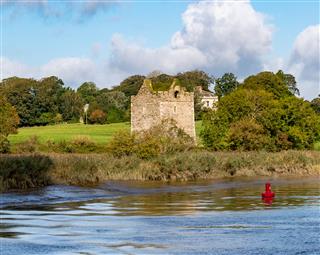 Annaghs Castle or Castle Annaghs is a medieval tower house of Norman construction dating from the late 12th century. It occupies a strategic riverside position. It is reputed that the Norman knight Richard de Clare, also known as Strongbow, and Aoife, the daughter of Dermot McMurrough, King of Leinster resided here.

Strongbow led the Norman invasion into Ireland at the King’s request, and in return received his daughter’s hand in marriage. While it was an arranged marriage, under Brehon law both the man and the woman had to consent to the marriage, so it is fair to believe that Aoife accepted her father's arrangements. They were married in Christchurch Cathedral in Waterford and had three children. Known as “Aoife the Red”, she led many battles on behalf of her husband and defended their territory until her death.

Part of the adjoining buildings are credited to the legendary seventh century architect The Gobán Saer, who was reputed to be the greatest craftsman and builder who ever lived in Ireland.

The stately Annaghs House now overlooking the river from the distant hill was built between 1797 and 1801 by Edward Murphy. Murphy married in Spain and returned with his Spanish wife to take up residence here. Unfortunately, the story goes that she had seemingly been expecting to be crowned queen of half of Ireland for all the money that she had sent for its construction. Her disappointment was said to have been so great that she refused to remain at Annaghs and promptly returned to Spain.

Another local Spanish connection was through William Garvey, founder of Bodegas Garvey of Jerez, Spain. Born in New Ross in 1756, Garvey went to Cadiz in 1776 in search of merino rams to mate with his father’s ewes. According to legend, crossing the Bay of Cadiz his ship encountered a dreadful storm and was wrecked. Garvey was fortunate to have been rescued by a Spanish navy ship. The captain's daughter, Sebastiana, nursed Garvey back to health. They fell for each other and were later married and had two children. So it seems Garvey never returned to New Ross.  Apparently, he did send the sheep though! He became a merchant in Sanlucar and later Jerez, establishing himself as a leading wine merchant. He built his own winery or bodega in 1793 naming it Bodega San Patricio and creating the famous brand, Bodegas Garvey. 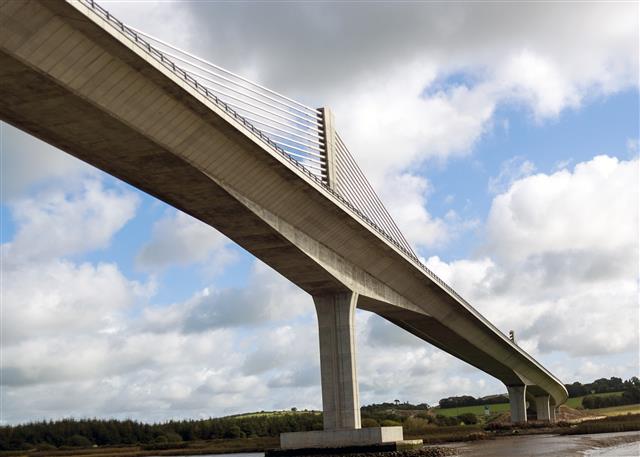 Officially opened in 2020, the bridge links the N25 with the N30, bypassing the town of New Ross, the bridge is the longest of its kind in the world. A feat of engineering, the bridge is 887m long with 230m spans between post-tensioned concrete decks.

It is built from 7,000 tonnes of reinforced steel, the equivalent of the Eiffel Tower and 500km of cabling wire -that's about the length of the island of ireland.

The bridge has won numerous awards including the 2021 International Association of Bridge and Structural Engineering (IABSE) Outstanding Structure Award and the 2020 ACEI Project of the Year and Engineers Ireland’s Engineering Infrastructure and Buildings Award. 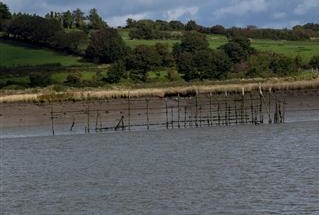 As we pass along the Suir and Barrow we will spot the skeletal remains of the salmon fishing weirs embedded in the mud banks on either side.

This method of fishing dates back to ancient times and ownership of the weirs was a much coveted asset and was often associated with religious communities or establishments. Use of the weirs was often leased to local residents as a means of guaranteed income.

In 1246 the Franciscan Friary in New Ross leased their salmon weir to Walter Archer and James White for twelve shillings per annum.

In the year 1607 there were 4 fishing weirs on Great Island and were still in existence in 1840 when the first Ordnance Survey was published.

However these weirs interfered with the snap net method of fishing by the “cot men” on the river and an 1837 report recounts that “There was formerly a profitable fishery, chiefly for salmon, carried on in small boats called cots; each cot employed two nets and four men: it has latterly declined considerably, the cause of which is said to be, in a great measure, the erection of Scotch weirs lower down the river.”

Scotch weirs introduced in the early 19th century were more substantial and were owned by local landlords who leased them to local fishermen. Their effectives impacted on other fishing methods as already described and were a source of conflict between the rival operators.

In addition the structures constituted a danger to shipping and were a constant source of complaint by visiting mariners. 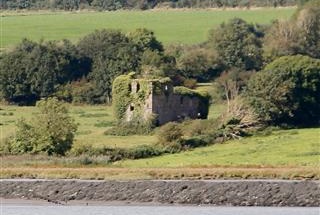 Ballinlaw Castle is a Norman Towerhouse which watches over the ancient site of the Ballinlaw Ferry. Once the property of the Earls of Ormond it was ceded to Oliver Cromwell in 1653 by Richard Butler. The Butlers also had significant connections with Mountgarret Castle and St. Mary’s Church in New Ross.

The Ballinlaw Ferry dates from early Christian times facilitating travel between the neighbouring localities. A ferry service operated here up to the 1960’s. Cross river ferries operated in a number of places along the Barrow and even though the town of New Ross is credited with having seven bridges from William Marshal’s first in 1210 there were decades when the town, for many reasons, was without a bridge and the lucrative option of a dedicated ferry service provided the vital commercial and social link. The provision of a bridge at this spot was briefly considered during the 1860’s but was never progressed. 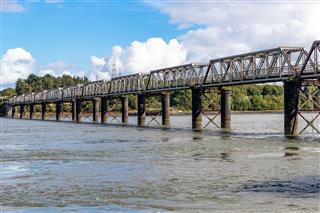 This 650 metre long railway bridge is known locally as The Barrow Bridge and connects county Wexford on the east to county Kilkenny on the west.

Constructed by the Glaswegian firm of William Arrol & Co. for the Fishguard and Rosslare Railways and Harbours Company it was opened in July 1906. It was the longest bridge of any kind in Ireland up to 1984. It carried the rail link between Rosslare Harbour and Waterford City but closed to traffic in 2010.

The bridge consists of 13 spans, 11 of which measure 45 metres and 2 of 43.8 metres. The opening span measuring 66 metres allows New Ross bound vessels to pass up and down stream.

While the bridge is currently closed to traffic there is much debate as to its future with options such as a Greenway and reopening the rail link to the fore. 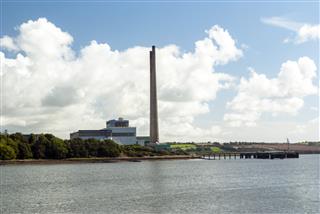 Great Island is reputed to have been an entry point for the first inhabitants of Ireland some 5000 years ago. Some scholars believe that the place where Cessair, granddaughter of Noah, landed with 49 women and three men, was not at Cork but at Great Island.

Early medieval references to this locality are titled “Hervey’s Island” due to the fact that the Norman knight Herve de Montmorency established his base here in the 12th century.

The area contains many relics of ancient settlement none more impressive than the nearby ruins of the medieval Cistercian Dunbrody Abbey founded in 1182.

The ESB opened an electricity generation station at Great Island in 1967 and this site is now occupied by SSE Thermal.

The salt marshes around this area are significant wildlife habitats.

Towering over Cheekpoint, is Faithlegg wood or ‘the Minaun’.  Minaun Hill has spectacular views across the estuary out to sea, making it a great lookout. Legend has it Fionn Mac Cumhaill  deputised his son Cainche Corcardhearg to wait in watch as protector of his realm.

Belview Port is now the centre of operations for the Port of Waterford. In previous years shipping would have proceeded further upstream to moorings in the city. In 1992 the port moved downstream to Belview involving a major upgrade to facilities available to shipping in the ensuing years.

The port can cater for vessels of up to 40,000 tonnes including cruise liners. Continued expansion is planned in conjunction with the adjoining industrial zone where one recent significant occupant is the Glanbia milk and nutritional ingredients facility which exports to Asia and North Africa and other regions. 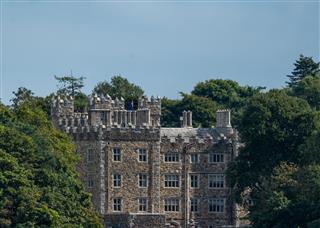 This 310 acre island is now the site of the luxury Waterford Castle Hotel and Golf Resort. Access is by a private ferry service. It is surrounded by the river Suir and what is called The King’s Channel.

It is reputed that a Monastic settlement existed on the island sometime between the sixth and eighth centuries. Later it was occupied by the Vikings of Waterford not least because of its strategic position on the river.

After the arrival of the Normans, the Fitzgerald family built a Keep or Tower House on the island.

Over the following centuries the structure grew and developed into what it is today but still retains features from its bygone days.

The island is a considered a location of significance for bird watching. 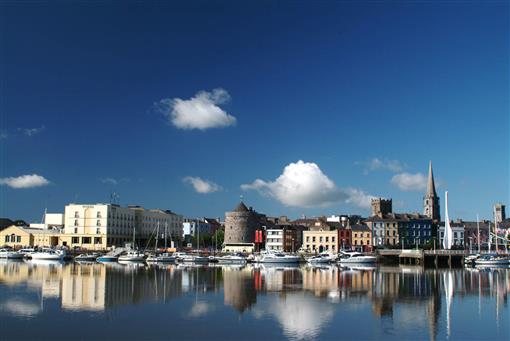